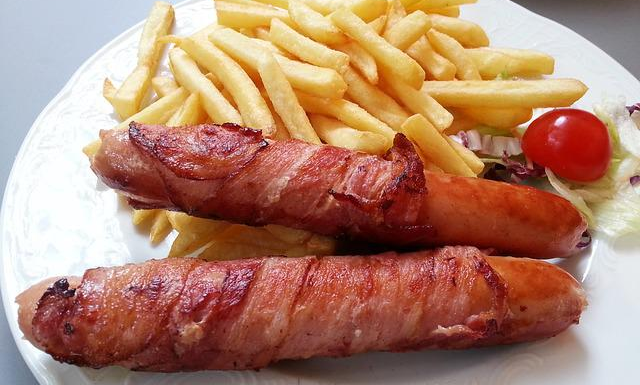 Vienna sausages are thin parboiled sausages that consist of pork and beef in a casing of sheep intestine. This may not sound too bad, but the truth is they are harmful to dogs. Vienna sausages are high in sodium and do not have any nutritional value. Though they are not immediately toxic, so your dog would be okay; they may develop health issues over time.

Reasons Why Dogs Should Not Eat Vienna Sausages

Vienna sausages, as a concept, should be okay for dogs to eat, but the processes they go through before preparation is what rules them out. Many vets indicate that even with a low sodium intake, it would slowly cause adverse physical, behavioral, and social side effects.

Vienna sausages are not only made of proteins but come with many calories from the fat content levels. If you are also wondering, ‘is bacon grease good for dogs?’, it’s the same principle—unfortunately, these make them a problem for those dogs that are not as active or are prone to weight gain. It can lead to pancreatitis or kidney issues if dogs continuously eat products like these.

They are seasoned with a lot of salt to make Vienna sausages tasty. That may be okay for people, but dogs have a very low tolerance for sodium. Sodium toxicity can happen when a dog ingests more than two grams per kilogram of its weight [1]. Vienna sausages are liberally seasoned with salt, so this would not be advisable. Salt poisoning in dogs can result in lethargy, vomiting, decreased appetite, and incoordination. If the symptoms persist, it can even lead to death.

It is one of the most feared issues when giving dogs processed or cured meat. Dog vienna sausages typically have additives and preservatives which cause health issues. The preservatives have carcinogens and other elements which cause long-term damage to the dog’s body. Most processed meats also include harmful ingredients like sodium nitrate, which may cause problems in the future for dogs like heart disease.

Vienna sausages are seasoned with salt, onion, and garlic powder, which is poisonous. Like other members of the allium family, these contain compounds such as disulfides and thiosulfides that poisonous if ingested. When dogs eat these elements, it can lead to Heinz body anemia or methemoglobinemia, when there is damage to the dog’s blood cells.

Prolonged exposure to Vienna sausages may also lead the dog to get pancreatic and kidney disease. It is because they cannot regularly process the high percentage of fat in the sausages. That manifests in vomiting, urination, and extreme thirst levels. It is similar to pancreatitis, except the latter increases the chances of a hunched back. The American Kennel Club maintains that you should observe the pup for some time if they start coming down with the aforementioned symptoms. However, they also urge you to contact the vet with immediate effect should your dog manifest these symptoms simultaneously because both pancreatitis and kidney disease can be fatal. Typically, it should not happen if your furry friend takes one bite of a Vienna sausage. Though, if it is permitted to eat these and other foods over time and comes down with these symptoms, please take the dog to the vet.

It should be clear by now that Vienna sausages are not a good idea for dogs. Several other healthier options exist, from commercial dog treats to natural fresh food. You can try out wet or fresh dog food suppliers that provide beef, chicken, or turkey meal plans specifically made for pets. These will improve the dog’s health by supplying all the required nutrients. You can try commercial sausage-shaped treats if these are too much of a hassle.

There are times when the dog steals things off a plate left in the open. It is probably because they have a better-developed sense of smell and can get to hdden human food much quicker. Regardless, if your dog shows signs of nausea or vomiting and the Vienna sausages are missing, try giving them water. It will fight the level of dehydration from sodium intake. You can also try to reset their systems by not giving the dog food for the next day so all of the sausages can pass through. Please fill the bowl up as well whenever it goes down past a certain point, so your dog does not remain thirsty. The thirst may remain for a few days after the experience. It would also help if you know how to stop a dog from begging.

It is not advisable for dog owners to have dogs eat Vienna sausage because they have too many additives and salt content, resulting in sodium poisoning. The additives may also cause problems to the dog’s health in the long term.

What happens if you dog ate Vienna sausage?

If your dog eats just a bite of a Vienna sausage, it will probably not affect it. However, consuming a bunch of them in one sitting could have mild to severe digestive problems. There may also be kidney damage or pancreatitis.