Most dog crates aren’t made for puppies. Fortunately, plenty of crates now have dividers so that a full-size crate can grow along with your furry friend. Before you buy one, though, you’ll be faced with the fact that it’s virtually impossible to look through every crate on the market for the crate that’s perfect for your dog.

Fortunately, that’s where this article comes in. At my website cozycrates.review, I have taken a look at the biggest names in the industry to find the crates that work the best for real consumers. Read on to find not only what features make a great dog crate, but also to find out where you can buy these incredible dog crates.

It’s important to remember that no one crate is the best. Instead, every dog owner needs to find a crate that is the right fit for his or her dog. Below are a handful of the crates that have the features that dog owners need to feel sure that their dogs are as safe as possible.

Traveling with a crate isn’t always as easy as it should be. While there are definitely plenty of different solutions that claim to be perfect for travel, the truth is that most of them are either too bulky for real travelers or that they are too weak to stand up to real dogs. Fortunately, this crate from Revol manages to be the best of both worlds, giving dog owners an incredibly handy travel crate that can work just as well as a primary at-home crate.

The big selling point here is always going to be the design of the crate. If you’ve ever had to assemble a dog crate by hand before, you know that the toughest part is never getting it set up the first time. Instead, the tough part comes from all of those problems that occur over time as you set up the crate and break it back down. This crate from Revol is actually meant to be set up and taken down with ease, letting you go through the whole process with nothing more than the turn of a handle. This really is a crate that puts user-friendliness at the top of its list of priorities.

Of course, even a crate that’s easy to use wouldn’t be of much use if it did not keep your dog happy. This crate is engineered for your dog’s comfort, with an easy-to-clean base and plenty of space. It even includes a divider for growing puppies so they don’t feel overwhelmed in their crate. This is a fantastic choice for any pet owner who’s looking to travel but who still wants to ensure that his or her pet is able to stay comfortable on the road.

There’s a reason that the standard design for dog crates has been around so long. While there are certainly some very innovative choices out there on the market today, the average dog owner really just wants to find something that is going to work for his or her dog. For those with puppies or who have smaller dogs, they’ll also be looking for something that can easily be partitioned. That’s probably why Frisco has made the choice to really double down on one of the most popular dog crate designs to ensure that its customers can get exactly what they need.

If you’ve ever seen a dog crate, your probably pretty familiar with the basics of this one. It’s got the same general setup – four sturdy walls and a roof surrounding a removable tray. It’s incredibly easy to create a space for your dog in here, and smaller dogs can really benefit from the inclusion of a divider. Perhaps the biggest feature here, though, is the second door – a must for those who have to figure out to wedge the large crate into smaller spaces or who need multiple ways to get to their pets.

There’s not a lot here that’s innovative, but that’s not a bad thing. The basic design for dog crates is popular for a reason, so it’s nice to see that Frisco is just trying ot ensure that they’re covering all of their bases as well as possible. It’s still a fairly easy crate to set up and to pack away, and it’s perfect for the vast majority of dogs and pet owners. If you are looking for a standard crate that is going to give your dog all the room he or she needs, this is probably going to be a good fit for you.

At the end of the day, not everyone needs a big dog crate. While it seems like most of the pet industry is really focused on giving consumers as big a product as possible, the truth is that smaller dogs won’t always feel as safe when they are in bigger spaces. As such, it can be very helpful for owners of smaller dogs to have access to a smaller crate that also provides all of the safety and security of a bigger piece. Fortunately, MidWest offers just that with its iCrate.

The iCrate generally feels like it’s meant to be a travel crate. A lot of the marketing around the crate talks about how easy it is to put together and take apart, which is definitely very appealing for those who just need an extra travel accessory. The truth, though, is that this crate really is strong enough to stand up to even daily use. This is an excellent choice for those who have puppies, for example, but who know that they’re not going to have to have too much extra space when that puppy grows up.

This crate is, however, pretty feature light when compared to some others. It has a single door, which is nice for those who have escape-prone dogs. It does still have the usual easy-to-clean design and strong construction, though, so you’ll never have to worry about it getting to a state in which you cannot use the crate. If your goal is to find a perfect place for your smaller pet to relax when you are not around or when you are on the road, this is definitely an excellent choice.

How do you improve on the standard dog crate design? If you’ve ever been out shopping for a crate, you know that most of them tend to follow some fairly similar design aesthetics. Instead of trying to radically reinvent the crate, most companies stick to trying to solve some of the few fundamental problems with the traditional design. EliteField didn’t necessarily go out of its way to change up very much with its dog crate design, but it did seem to put in a little extra work to ensure that it would be both safer than average as well as a little easier to use.

The good news is that the things that EliteField kept from the basic design are all the things that most dog owners love. The sides of the crate feature bars that are hard to bend or break, but that won’t cause damage to a dog’s paws or teeth. The crate itself has a removable tray on the bottom that makes it easy to clean as well as space for a divider to be used to ensure that any dogs inside will be able to have an appropriate amount of room for their own comfort. This is the kind of general engineering that most dog owners tend to appreciate.

So, what’s different? The big thing here is the third door. You can open this crate from either side or from the front, which is not only great for access but very important for those who might have two dogs in one crate. The doors themselves also have double locks, which makes it harder for escape-prone dogs to get out without permission. Though the overall changes to the design are fairly minor compared to other crates, they’re definitely the type of changes that can make this crate the right fit for a certain type of dog owner.

The final entry on this list is the crate that’s probably the closest to what one would think of as the default. Though it doesn’t have any of the fancy features of the other crates on this list, it is still a large crate that can handle the needs of all but the most rambunctious of dogs. If you’re in the market for a very good dog crate that can still be moved or have a divider placed in it, this is definitely the crate against which you are going to end up comparing all others.

So, what do you really get from the default kind of dog crate? For the most part, what you’re getting is utility. There is only a single door here, as with the smaller crate, but there’s a lot more room. This is ideal not just for dogs who are bigger now, but who might grow bigger in the years to come. As these rust-proof cages are meant to last for a long time, this is an ideal crate to get if you are looking for something that can stick with your puppy from the time he or she comes home to the time that he or she is a full-grown dog.

This crate does incorporate a lot of little touches to show how far the basic crate design has come in recent years. All the edges are rounded, so it’s less likely that a rambunctious do can do any damage to himself or herself. The metal on the outside is also designed not to rust, so you can expect the crate to last for many years to come. Even the removable tray a fairly nice feature that wasn’t common at first, but it does allow the dog owner a chance to keep the cage cleaner. There’s a reason why this design is so popular, after all. 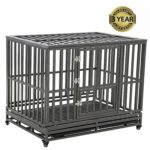